Twas the day before Christmas, 1992 and all the haul trucks' were stirring and all the conveyors were whirring and not a shift foreman was to be seen in the Morenci mine. It was another typical boring day of checking the new benches that had been shot on the North-West Extension of the Morenci Mine with the working cohorts of Southwest Minerals (owners; Zee Haag and silent partner Wayne Thompson) James Dunn, Betsy McKitrick and myself, Mark Kielbaso. 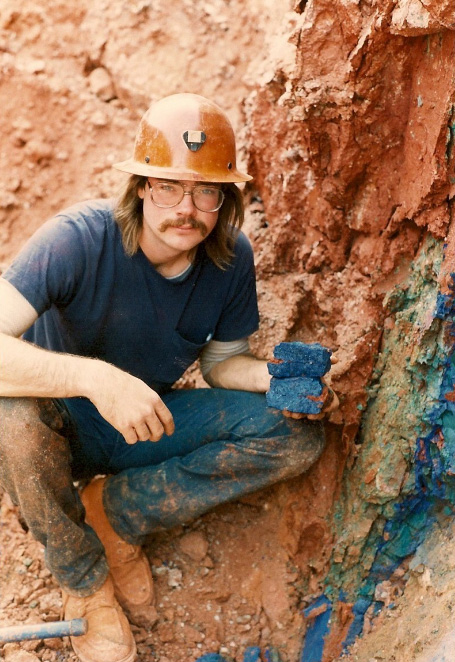 We arrived late morning as it was a bit frosty and the air still had a bite to it; checking into the mine gate and then proceeding to our container full of collecting equipment. We loaded up our wonderful 1968 flat bed Ford truck, which ran on baling wire and assorted clothes pins to keep it chugging down the road, which was quite a site as the diamond plate bed of the truck was not welded to the frame, but just kind of shook around whilst driving down the bumpy mine roads. The truck sported the latest non-synchronized four speed transmission, so it was more like a grind in find to roll across the pit to our destination, only the finest mining equipment was afforded to the miners of Southwest at the time.

After lumbering across the breadth of the Morenci pit on roads that resembled giant swaths of chocolate mousse that had tire ruts that were in the neighborhood of a foot and a half in places made by the three hundred ton haul trucks with twelve foot high tires, which in turn made it more of a slip and slide experience for the little Ford that could,...or maybe couldn't on some days we came upon the bench that we needed to check for minerals. We popped out of the truck and started to walk the lunar landscape of a new shot, which in and of itself takes a bit of getting used to as everything movers under foot making for more of a controlled fall all of the time. We had all split up to cover the 100 yards or so long and 30 yards wide shot looking for any color that would indicate mineralization under the top layer of dust and mud. 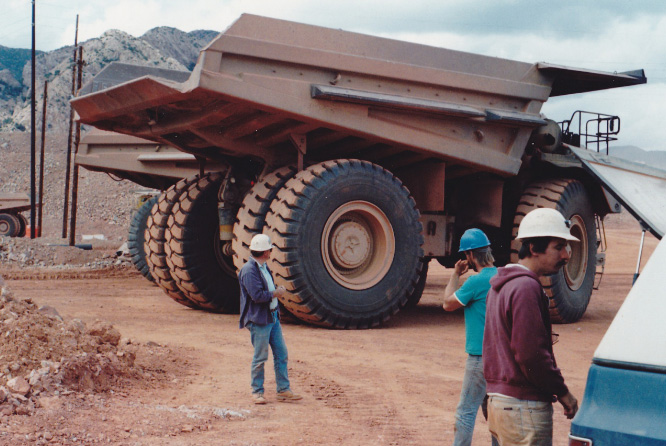 A 300 ton haul truck parking itself in front of Stan Esbenshade and Wayne Chartier.

James was the first to pick up a large chunk that resembled a red brick on the outside due to the red clay which was stuck to the outside of it, but sported a little corner that had been nicked and shown blue. Betsy and myself came over to check out the find and we subsequently broke the piece in half and it was solid azurite! This was a two pound chunk of solid azurite, which was unheard of up to this point...oh sure; you heard the stories from the old timers talking of great hits and the literature that spoke of solid veins of azurite, but that was a hundred years ago! Here was a huge chunk staring us down and we all began to start breaking brown lumps in the surrounding area and hefting pieces to check weight as this was a key indicator to ascertain if the piece was solid azurite or just rock. Within a half hour we had accumulated close to five hundred pounds of solid azurite and had narrowed the debris field down to a smaller area, which appeared to be where the source may lay below the surface. 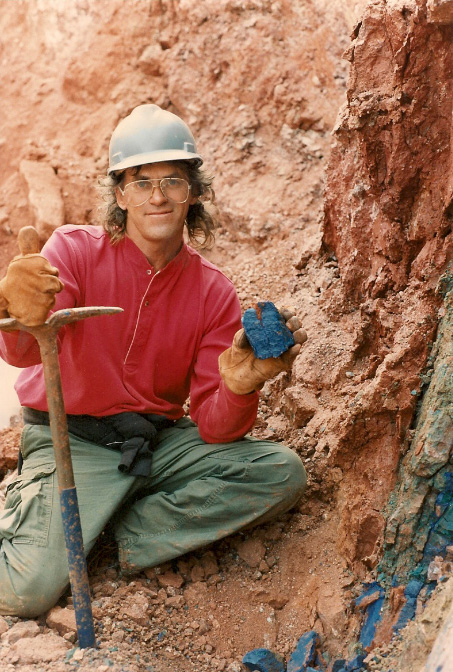 I quickly went to the bench above us to retrieve our trusty Link-Belt twenty five ton excavator, which no field collector should be without; hammers and chisels, so caveman and barbaric. I fired up "Kitty" as we called her and started the pre-trip maintenance check to make sure she would make it down to the next bench and then started the clickety-clackety trip down to the azurite zone.

Upon arrival with the excavator I started to cut parallel trenches trying to cut the source of the azurite and within twenty minutes a bucket came up from the trench and was raining blue azurite all around as I swung it to dump near the truck. Betsy, Jay and myself all surrounded the pile that lay in front of us and could not believe our eyes for the whole pile was blue, almost two hundred pounds! I quickly returned to the excavator and started digging like my ass was on fire and my hair was catching. Dipper load after dipper load came out of the trench raining blue and the piles started looking like a gopher colony had moved into the area around the truck. Jay and Betsy quickly filled the two fifty-five gallon drums that we had on the truck from the container. Jay decide to go to the container and dump the drums and pick up all he could of empty ones and head back, as it was getting late in the day and we were not allowed to be in the pit after dark due to safety reasons. 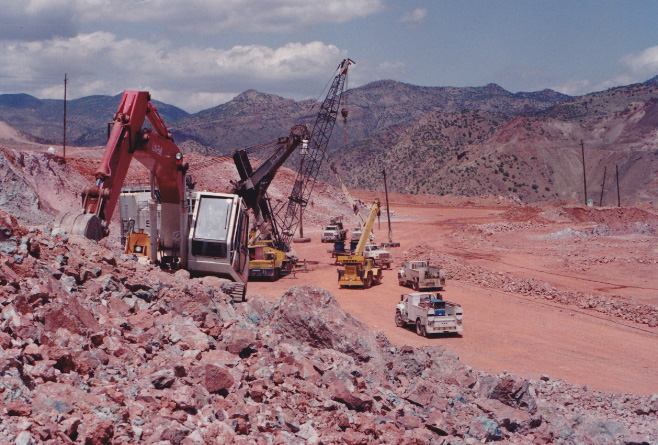 Jay returned with the empty drums and we began to load the truck when the shift foreman for the North-West Extension arrived out of nowhere and told us we would have to vacate the area as the shovel on the bench below was going to be digging in the area just below us. This was not good news as we had just hit the mother lode and we were already contemplating the Harley-Davidson motorcycles we would be riding with our bonus.

I went over to the hole that I had created and decided to back up about twenty feet and cut a shallow ramp into the azurite producing hole and put "Kitty" into the hole and out of sight. Jay went to the front of the bench and watched for the shovel below, so "Kitty" would not be scooped up and put into a haul truck as this would be a bit tough explaining to everybody. Every few minutes or so the arm of "Kitty" would pop up over the bank and drop a load of azurite. This went on for about forty-five minutes when the sun began setting and we had to start wrapping things up for the evening. We had just put close to five tons of azurite on the bench in two or three hours and the vein showed no signs of slowing up in the bottom of the hole. The azurite plates were up to two feet square and four inches thick on some and lined both the hanging wall and foot wall of the vein with up to six inches of red mud in between. 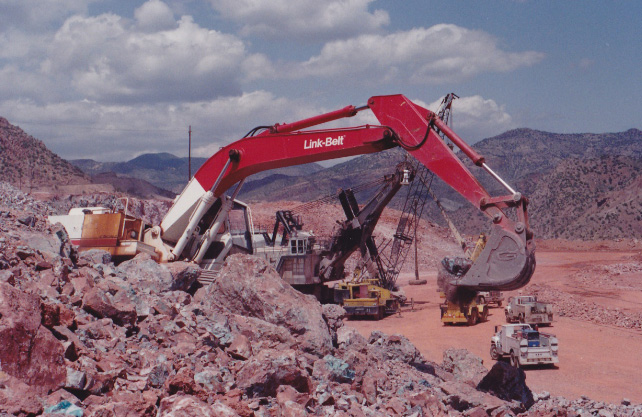 I called the shift foreman to come back to the hole and explain that we had hit the best thing that had happened for a long time for Southwestern Minerals. The shift foreman was sympathetic to our plight and decided to flag off the area, so that it would not be mined and hauled off. We continued to pack up our material and remove the excavator back to a safe area for the night and headed for the mine gate and home feeling secure that all was good for next day of digging.


James, Betsy and myself arrived the next morning with sugar plums dancing in our heads for the haul we would make today. When we drove up on the bench where the hole was, we all stared in utter disbelief as the bench edge was straight for 200 feet and then where the azurite hole was the night before there was a twenty foot "bite" missing before the edge returned to travelling straight. I could not believe what I was seeing standing at the edge of the bench and looking down the wall to the floor below some 50 feet. The entire wall below my feet was a slip plane of red mud covered with azurite dust and bits of azurite chunks sticking out for 30 feet wide and 50 feet deep. After prying my eyes off the wall you could see blue all over the bench floor below us where the haul trucks had been loaded and the azurite was spilling off the sides of the trucks as they started off for the dumps. I quickly went below to survey the situation and was aghast at the site of the wall and the scope to which the zone was running. You could see the excavator trench cut into the wall where I had been digging the night before as if you had taken a cross section of an ant farm and were studying the area. There was azurite leading all the way off the haulage bench and towards the Coronado dump, like bread crumb trail for the near sighted mineral collector. Jay and I followed this bread crumb trail until it ran out nearly a quarter mile before arriving at the dump. Jay and I took a quick look around the edges of the dump and could not find any blue...what had happened to all of this material we pondered? I was beginning to see red by this time and went flying back to the bench at, which time a safety person appeared out of nowhere and proceeded to tell me that I was speeding in the pit, which was no-no. I talked to him for a while about my bad behavior and then told him about what happened during the night with the azurite zone. We called the shift foreman over for a speak easy on the azurite bench and then he proceeded to show me the night shift report, which stated to Mine the Blue Hole! The shift foreman would not show me who signed off on the report, so I decided to invite myself to the Mine Superintendent's office for a conversation about the azurite hole. 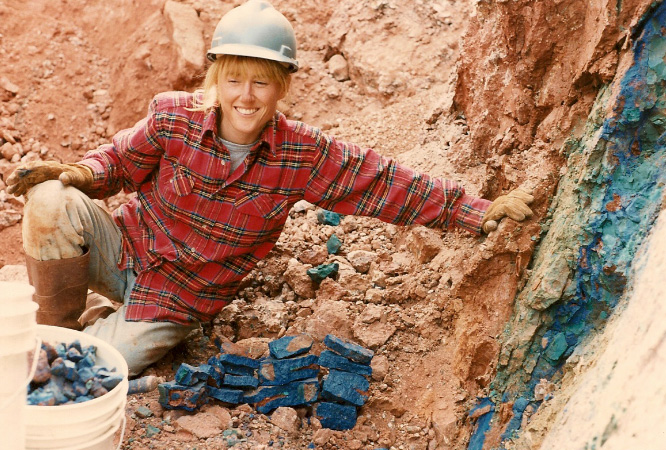 The conversation with then pit superintendent Mike Allen quickly turned sour with no explanation as to why this would happen when the azurite hole was beyond final limits for this bench. As a consolation prize I was told that next time we hit big we could call the safety department and if the zone warranted it, lights could be set up and Southwest could work through the night with supervision from the safety department.

I returned to where I had left Jay and Betsy and we picked up what azurite we could that was laying around the area. All in all we collected close to ten tons of solid azurite in three days and would continue to collect the zone into the floor of the next bench for the next two weeks. After telling Zee Haig of the situation a few days after Christmas, he told me the azurite must be stashed somewhere on the property and subsequently hired a small plane from Tucson to fly over the pit with then employee Paul Newman ( not the actor with the same name) to look for piles of blue from the sky. Nothing ever came about with this scenario and no azurite was ever found from the zone that was carried out during the night. 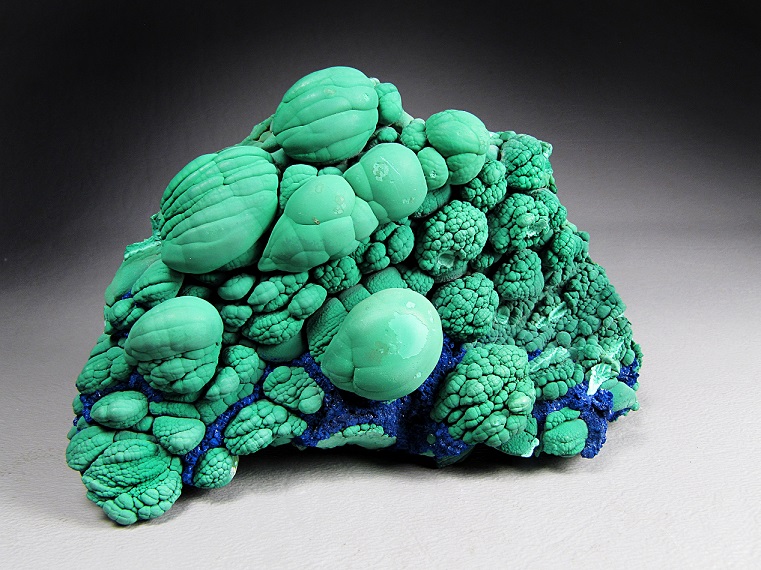 Malachite with Azurite - One of only a handful of specimens to come from the Pigment Zone. Photographed by Mara Kenyon 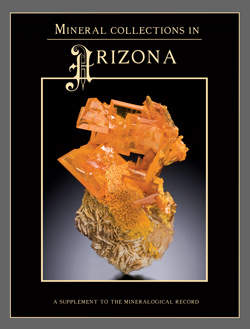 The Malachite and Azurite specimen from the pigment zone is featured in the Mineralogical Record Vol. 44 No. 3.1

A couple of years later the mystery that surrounded the Mining of the Blue Hole was partially cleared up when certain facts came to light with upper management at the time and some of the things that were going on in the pit. Subsequently; what we thought would be excellent pigment material for the paint industry ended up containing too much tenorite and when ground for the pigment turned out too dark for the paint. Most of the material from this zone wound up in China at the various cutting factories and turned into carvings. 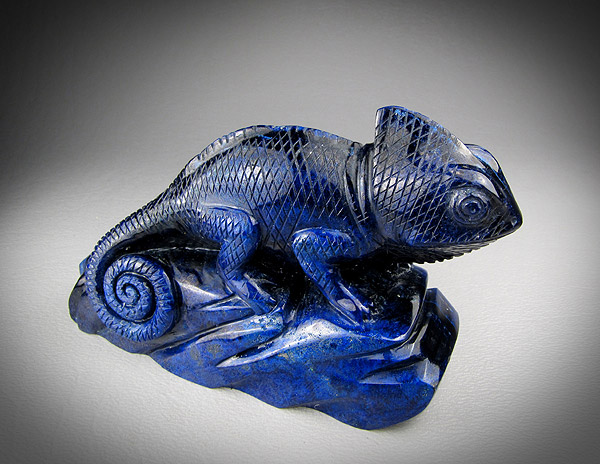 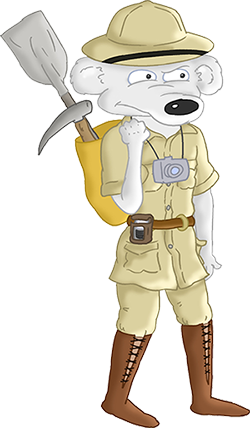